Epson quietly released a new version of their popular scanning software “Epson Scan” that comes bundled with their document and flatbed photo scanners. But, there's already been confusion as to which scanners and operating systems it supports. Could it be possible that “Epson Scan 2” won't even run in the latest versions of Microsoft Windows?

Epson Scan 2 is an incredibly welcoming upgrade to those of us who have been using their original Epson Scan software all these years with what seems like no significant updates along the way. While other popular applications we all use routinely have received incremental upgrades through the years, as design aesthetics and technologies have changed, Epson has held the original Epson Scan back by ensuring the software looked and worked the same way for over a decade.

But, I have to say, since the time I discovered the new update in late 2019, I'm been quite impressed overall with what Epson has achieved with the almost complete overhaul. In my opinion, even though noticeable features weren't added in this upgrade, Epson Scan 2 is still quite an improvement over the original Epson Scan scanning software.

As you can see in the comparison screenshot below, Epson Scan 2 is cleaner looking, more compact, and with often-used settings and buttons reorganized so they are more logically located and easier to find. This translates to a scanning experience that's less confusing and therefore a lot more fun.

For me, if you're about to scan a bunch of your family photos, the question isn't whether or not you should update your installation of Epson Scan to the new version — because you most definitely should.

The real question to ask is do you even have the option to install it on your computer?

Surprisingly, this latest version of Epson Scan isn't compatible with as many scanners or operating systems as you would like to believe.

I started using Epson Scan 2 in the fall of 2019 on my Mac desktop computer connected to Epson's “Perfection” line of flatbed photo scanners. As time passed, and I began to realize there was very little information published about the new version — even on Epson's website.

I started to wonder how many other people were even using this new version. Maybe there were a lot of Epson flatbed scanner owners who haven't even heard about this major upgrade yet.

As I dug deeper into the compatibility of Epson Scan 2 with the most popular and latest models of their Perfection scanners, I was actually quite shocked to learn that there appeared to be a huge missing segment of users that — at lease currently — aren't even capable of installing Epson Scan 2.

It was seeming to me as if Epson hasn't make it possible for their Perfection line of flatbed scanners to work for anyone with a computer running Windows — even if they had the latest update from Microsoft.

This just couldn't be. Could it?

So I immediately reached out to the customer support team at Epson America, Inc and spoke to someone specifically about their release of Epson Scan 2 and who it was intended for.

When asking specifically about Epson Scan 2 running on Windows, Epson's support responded with the following details:

Epson Scan 2 for Windows was developed for retail/business document scanners; see exceptions below.


Scanner Models that use Epson Scan 2 in Windows:

After reading the information they sent to me over several times, my takeaway was that Epson never looked at the development of “Epson Scan 2” as a piece of software that was badly needed to be a replacement to their aging scanner software across their entire line of scanners and on both operating systems.

Because of this, on Windows computers, I believe they were strategically choosing to update the scanning software on only a couple subsets of their scanner models. Therefore, it's hard for me not to believe their main focus was just to improve the user experience for their business users who primarily use their Epson scanners to scan office documents. Which, to be fair, is likely a much larger division that brings in a lot more revenue.

Because I have already been using Epson Scan 2 on my Mac for some time now, I obviously already knew that Epson Scan 2 was compatible with their Perfection line of flatbed photo scanners. And because I'm pretty versed with the intricacies of every macOS update before it comes out (I'm a nerd that like!), I was quite confident I already knew why Epson Scan 2 was chosen to run with more Mac scanners than on Windows. But still, I was certainly very curious to find out how willing Epson's support was going to be to truthfully explain and hopefully even defend this unusual discrepancy.

Here's what Epson had to say about why Epson Scan 2 works with macOS:

Apple's macOS 10.15 “Catalina” operating system requires 64-bit drivers. [The original] Epson Scan is 32-bit. So, on select models, we updated the driver to Epson Scan 2, which is 64-bit.

If this overly “techie” explanation went completely over your head and crashed in the next room, let me break it down for you in “normal person” talk.

When Apple released their latest version of their Mac operating system for desktop computers in the fall of 2019 — called version 10.15 “Catalina” — they stated that applications would run faster and better and it therefore would be a win-win for all of us. But, for this to happen, all current applications running on our Macs had to be re-written in a new way by the companies that develop them with programming code so that they will work in this new “faster” and “better” operating system. The old “slower” code is technically referred to as “32-bit” and the new and improved code is called “64-bit.”

So, what I assumed to be true — and what I believe Epson's support “admitted” in their single sentence to me — was that the only reason Epson made it possible for Mac users to use Epson Scan 2 with their Epson Perfection flatbed scanners is because they literally had to. Their hands were basically tied.

See, if Epson didn't make Epson Scan 2 work on Macs, every single Mac user who upgraded their operating system from an older version to macOS 10.15 “Catalina”, or anyone who bought a brand new Mac which already had “Catalina” pre-installed on it, would find out their Epson scanner would no longer work with Epson's own scanning software — the original Epson Scan.

Can you imagine what kind of a public relations nightmare that would have been for Epson!?

So, it seems like Epson had two choices. Either upgrade the old programming code in the original Epson Scan scanning software so that it would work for “Catalina” users, or make changes to their more recent scanning software (“Epson Scan 2”) written for their FastFoto “sheet-fed” scanners and retail/business document scanners so that it would also work for macOS “Catalina” users with their flatbed scanners.

We certainly know which choice they ended up choosing. And in this particular case, we have the “higher-ups” at Apple to thank for always pushing the limits of what Apple devices can do and what they require to make these advances possible.

I think it's also important to mention here that even though the original 32-bit version of Epson Scan doesn't run on macOS 10.15 “Catalina”, the new Epson Scan 2 version however will run in in the earlier macOS 10.14 “Mojave.” So, if for one of many reasons your Mac is still running a version of “Mojave,” you technically can have both the original Epson Scan and Epson Scan 2 installed at the same time, and they will both run. However, if you're wondering, no, you can't have them both running at the same time.

I've compiled a nice organized chart for you that will show you which of the latest popular models of the Epson photo scanners are currently compatible with the Epson Scan 2 scanning software.

Will “Epson Scan 2” Ever Work With Epson Perfection Scanners in Windows 10?

For many, it will certainly be disheartening to learn that this new and improved version of Epson Scan currently won't work with your Perfection scanner model in Microsoft Windows. Nope, not even with their top-of-the-line V800 series flatbed models!

It's almost hard to believe.

Epson support specifically stated in their correspondence with me:

For now, all photo scanners for Windows will continue to use [the original] Epson Scan, except for the FastFoto series.

The key words really worth highlighting here are “for now.” The eternal optimist in me believes that someday, the Perfection line of Epson scanners will also support Epson Scan 2 in Microsoft Windows.

I think it's a fair assumption the current state of incompatibility is based on financial rationing. Likely they are performing a “triage system” of servicing where they are choosing to only spend the money to re-write their applications and drivers for the scanner models and operating systems that require the updates first. Which means someday, maybe, well hopefully, there will then be enough finances to achieve parity of support for Epson Scan 2 across their entire line of scanners.

But, I certainly understand this defense (or at least an explanation) is likely going to be of little comfort in the short term for all the Microsoft Windows users out there — especially those who own one of their top-of-the-line V800 series flatbed scanners — who are left feeling unappreciated because they aren't able to run the “latest and greatest” version of Epson's own scanning software. 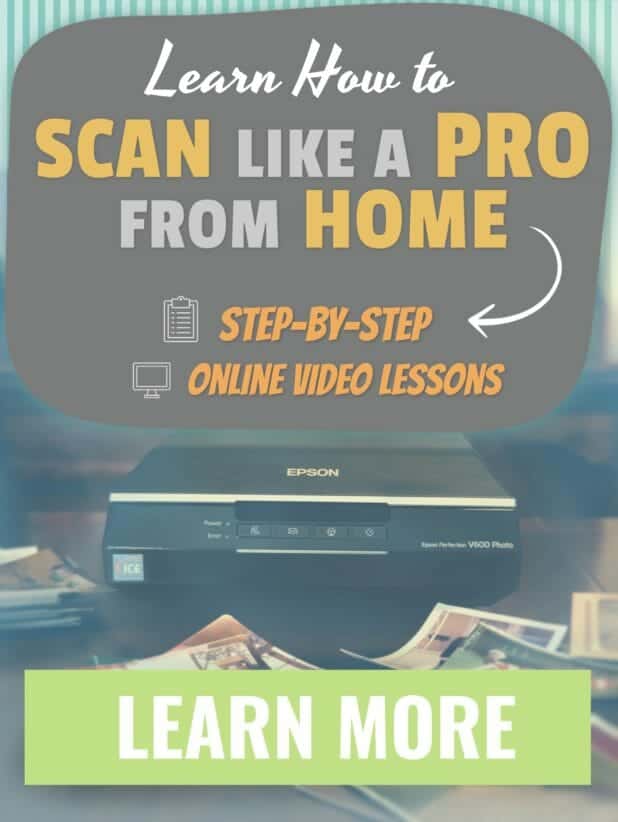 As a Wyoming farm gal, I was raised with the phrase “It’s better to aim for the stars and miss than to aim for a cowpie and hit.” Well, that’s great advice … unless your goal actually is to hit the cowpie.

My scanning goal really was that simple, but for some reason, aiming at the cowpie just wasn’t working. So I changed strategies and aimed for the stars. The result? Read on to find out. And hopefully, by sharing my scanning journey, it will help you on your scanning journey.

Scanning All of Our Family Photos … What’s the Actual Point?

For anyone with children, or with other family members such as nieces or nephews, the answer to whether or not we should scan our old family prints, slides and negatives may seem quite obvious.

But, when I received this email from Jennie, asking me why she should go through all the trouble of taking on such a big scanning and organizing project when she doesn’t have younger family to pass it on to, I was struck with the thought that many of you might be asking yourselves the same question. Maybe even for some of you who actually do have family to pass your scanned collections on to!

If you don’t have or know anyone that will truly cherish your scanned photo collection once you’ve passed, is there even a single reason to scan any of your old family photos?

Being a man of action as well as words, my son Mark bought me a slide scanner and taught me how to use it. I scanned in the slides of the Holy Land without much difficulty. I was delighted to be able to view them on my computer with the same ease as I could view the digital photographs that I had started taking in 1999.

The remainder of the slides came first. Then I started work on the prints in the photograph albums that I had lovingly curated over the decades. The physical albums had started to deteriorate to the extent that some of them were falling apart. Scanning the prints was an ideal way to remedy this. I also scanned in all the prints that had not made the cut for the photograph albums but I had kept nevertheless. I also spent several months scanning in approximately 4,000 negatives. All in all I must have scanned nearly ten thousand photographs in one form or another.