Shocking Demo Shows Why You Need to Scan and Save Your Bad Photographs Too!

A blurry shot from slight camera movement – circa 1980 (raw scan)

I think we are almost to the point where I can safely say there is no such thing as a bad photograph.

Aside from the photos that are accidentally shot off or the ones where the camera is completely set wrong (for example in the more complicated manual modes), every photo — even the “bad” ones — will one day be a few clicks away from being usable.

Too Good to Be True?

The photo on the right is an example of one I never wanted to put in a frame or even an album because it's, well, a bit blurry.

I was a little boy when I took this with my very first camera I ever owned. I convinced my Mom to buy it for me for a nickel at a garage sale. I took this photo of my childhood friend and his cat and must have moved the camera a bit when pulling down on the blue plastic shutter button on the right side. The result made my friend look ghostly — soft and blurry. You can't even make out the writing on his t-shirt.

(I kinda made this term up – it's a reference to the unwanted Misfit Toys from a childhood favorite of mine ~”Rudolf the Red Nosed Reindeer.”)

A popular scanning “school of thought” I read about all the time on the internet is one that goes something like this:

(For the record: I shudder at the thought of anyone trashing any “one-of-a-kind” photograph!)

But, what if I said to you that I disagree with the above strategy and suggest that maybe you should consider doing the absolute opposite of this. Like maybe you should actually scan each and every photograph — yes even the misfits — from now on. Sound crazy?

Photo Magic is Already Here or Just Around the Corner!

In October of 2011, Jue Wang, senior research scientist at Adobe, showed off a jaw-dropping “sneak peak” of some technology that will make all of you who threw every one of your so-called “bad photos” away wish you had that day back to do over again!

Check out this 6 minute video if you haven't already seen it: 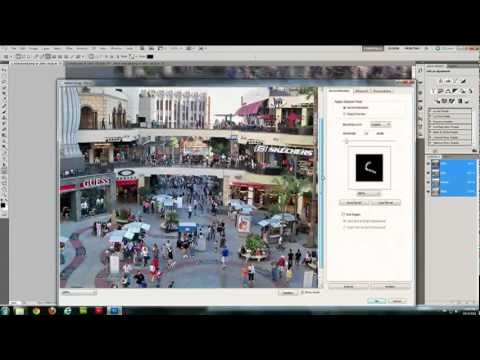 This may be great for all of your blurry shots you say, but I bet you are wondering about some of your other misfit shots — like where your Mom's finger was covering part of the lens? Or what about the ones that seem completely unusable because of a huge flash bulb reflection off a glass window that's smack dab in the middle of the shot!? Oh, and what about the photos of your family picnics that have giant buffalo grazing in the background that you would rather not be there?

What about those you ask. How can you easily remove something in the shot you didn't want?

Check out at least the first minute and a half of this second sneak peak if you haven't already seen “Content Aware Filling” in action:

It wasn't that long ago when the term “Content Aware Filling” was foreign to all but a handful of genius programmers. It was just October of 2009 when Adobe demonstrated this magical technique as a possible inclusion for the next release of their flagship professional image editing program Photoshop CS. And now, not only is it already available in CS5, this feature has already trickled down to the masses in their more affordable consumer level software Photoshop Elements.

And deblurring and Content Aware Filling are just two examples of futuristic image correction technology. Once your photographs are turned into 1's and 0's on your computer, it's just a matter of time before other types of unsolved imperfections get the royal “sneak peak” demonstration in front of a live audience.

Is the Fear of Any Kind of Photo Editing Keeping You From Scanning?

I know there are a lot of people out there who are probably so intimidated by all this technology, it's probably holding you back from scanning any of your photos. Every day, you see your photo collection staring at you from a cardboard box in the hall closet. Just the thought of having to learn how to color correct or even crop your photos could be ensuring you won't ever scan the first print.

But you know, seeing videos like the one above continues to convince me more and more that everyone — even the fearful — should just scan now and worry about making them look nice and pretty later. And when I mean later, I don't mean tomorrow or even next month. It mean, it could even be next year or even years from now when software technology is even further along than it is now.

And maybe you'll think I'm insane for continuing to suggest this, but I still say you should scan everything! Scan all your photos, not just the so-called “best of the best.” I say scan the blurry ones, scan the ones with a finger in the shot and also scan the ones with camera flash reflections.

I feel every unique photo is a photo worth saving. It's a piece of your life's story.

A camera flash at just the wrong angle messed up what would have been a great shot! (raw scan)

I kind of see the scanning portion of my workflow as collecting evidence in a crime scene — like from one of those network drama shows you know you like watching. Your job is to scan your photos in the best way you possibly can and then safely archive them. At a crime scene, this compares to collecting the evidence and carefully bagging and bottling it up, so that someday, analysis and science will produce the results you're looking for.

Like forensic DNA analysis is now helping to solve decades-old cases from archived evidence, advances in computer algorithms (like in the videos you just watched) will help to correct your misfit photographs that you never in a million years thought could ever be fixed.

As they say in Hollywood, or at least used to when they shot with actual film cameras, just “get it in the can!” It's just so, so, so important to get your photos scanned as soon as you can, even if you wait and do any needed editing at a later time.

Because, you see, the payoff to waiting is that someday, it's very possible technology may have improved so far that you will just have to press one giant button in your non-destructive image editor and all of your misfit photographs will instantly become perfectly color corrected, deblurred, and scratch, dust and buffalo free!

So am I insane or do you agree that maybe this really is a great way to look at scanning your own photo collection? Tell me how you feel in the comments below.

As a Wyoming farm gal, I was raised with the phrase “It’s better to aim for the stars and miss than to aim for a cowpie and hit.” Well, that’s great advice … unless your goal actually is to hit the cowpie.

My scanning goal really was that simple, but for some reason, aiming at the cowpie just wasn’t working. So I changed strategies and aimed for the stars. The result? Read on to find out. And hopefully, by sharing my scanning journey, it will help you on your scanning journey.

Scanning All of Our Family Photos … What’s the Actual Point?

For anyone with children, or with other family members such as nieces or nephews, the answer to whether or not we should scan our old family prints, slides and negatives may seem quite obvious.

But, when I received this email from Jennie, asking me why she should go through all the trouble of taking on such a big scanning and organizing project when she doesn’t have younger family to pass it on to, I was struck with the thought that many of you might be asking yourselves the same question. Maybe even for some of you who actually do have family to pass your scanned collections on to!

If you don’t have or know anyone that will truly cherish your scanned photo collection once you’ve passed, is there even a single reason to scan any of your old family photos?

You are going to send email to
Move Comment