The Simplest Way to Know Which Photos You Have Already Scanned 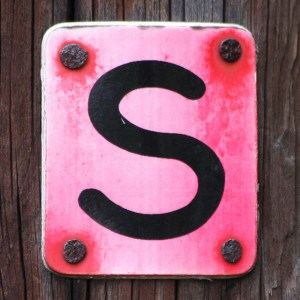 Unless you have found a way to scan your entire photo collection in a pre-organized “beginning to end” kind of way, I've found you're going to need a way to identify tomorrow, or possibly months later, whether or not you have already scanned a particular photograph.

And you're going to want to know by just looking at a print or slide in front of you – without booting up your computer to do a search. Trust me.

One way to avoid this problem is to immediately move the slides or prints you just scanned to a different storage place – a new photo album or a new archival page for example. Then you can tell yourself anything in these new “containers” have been scanned for sure. But for a number of reasons, you may not be able to do this.

I know, it sounds pathetic. You may think this won't happen to you because you have razor-sharp memory. But, if you're like me, you're spreading the task of scanning and organizing over months or [gulp] even years.

And therefore it's quite easy to be unsure at a later time whether or not you have already scanned that 12th photo in a series of 27 of your brother opening up his presents at his 8th birthday party. A lot of them look awfully similar don't they? 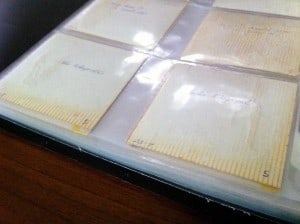 An archival page with prints I've already marked as “scanned”

I found a mechanical pencil I liked that could easily write on the variety of photo paper surfaces used throughout the years. Very carefully, I have been writing the letter “S” on the back side in the right lower corner immediately after I pull the print or slide from the scanner bed. The “S” tells me this photograph has already been “scanned.”

I've chosen that location because a description of the photo is often handwritten all the way across the top. And sometimes my Mother has written some sort of a “code” number in the bottom left that was used to identify or organize the print in one of her series of “brag books” she used to carry around. So this was the only place I knew would almost always be free for markings.

You can of course use any letter, word or even symbol you want as long as it makes sense to you and you won't forget what it means this time next year!

Here are some tips I've learned doing this: 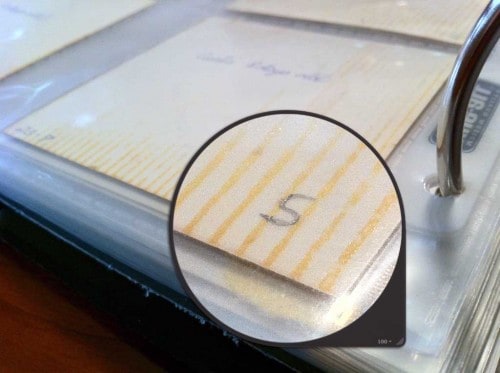 I would love to know if you think this will work for your collection. Or maybe you have a better way to solve this problem. Please let me know in the comments below.

Whether you or an avid hobby photographer, a true professional, or just want to get all the quality you can out of your prints and film, either one of these models is going to give you exceptional results. But, I want to help you feel confident you’re going to make the right choice.

Below, in plain English that will make it very easy to understand, I’ve written out and explained in detail, the 5 differences between the two models. Are 99.9% of Your Photographs Just Not Important Enough To Save?

If this was your entire photo collection sitting in this trash can in the photo above, would this make you actually feel relief … or utter panic?

What if I added to this scenario. What if to the best of your knowledge, all of your photos sitting in the trash were already scanned and safely backed up on a couple of your hard drives.

Do you now feel relieved … or still utterly panicked?

From everyone I have talked to about this scenario, it seems safe for me to say that I believe the world is in somewhat of a divide whether it’s actually okay to throw away your prints and slides once they have been scanned and digitally preserved.

And for some, hopefully not too many, I am sure they would say it’s okay to throw away many if not most photos before they were scanned and preserved.

Yes. You heard me. If You Don’t Add This to the Filename of Your Scanned Photos, You’ll Probably Hate Yourself Later

Whether you keep all of your scanned master (original) image files in folders on a hard drive, or you allow an image manager like Picasa, iPhoto or Aperture to manage them inside a library file, you will still be required to give each photo a filename.

It could be as simple and non-descriptive as “photo-1.jpg” or maybe even simple yet somewhat descriptive like “mom at the beach 1984.tif”.

But, it’s actually a very important part of the process of scanning photos, that if done with a little bit of forethought, can save you a lot of time and headache later. Last month I covered two complete months of scanning, but I learned that was just too much to talk about!

So this time is only one month and it’ll be a lot shorter.

What This Progress Report Is Really About:

Every month, I am posting a detailed report — just like this one — sharing with you how far I have come with my goal to scan and restore my entire 10,000+ family photo collection.

By doing so, I hope to inspire you to do the same!

In my first progress report, I set a goal for myself to do a little bit of work on my collection every single day. I shoot for about an hour a day which turns out to be about 30 scans a day. And I am going to record and detail each one of them so that you can learn from my transparency.

I don’t want to be “that guy” — a guy that tells you how you should scan your own photos but then sends all of my own to a scanning service to do the work for me. So you have a closet with boxes full of old prints and slides that you are dying to have scanned and neatly organized on your computer.

The problem is, you’re worried about it either costing you way too much money to send it to a scanning service, or taking too much of your precious free time to scan them yourself on a flatbed scanner.

I’d like to share with you my experience back scanning photos for the first week. If you want to make scanning your own photos fit into your busy and hectic life, I think my experience here might give you an idea how much time will be involved and how many photos you can easily get through. Ah, there’s nothing quite like reading a great caption to go along with a special photograph. Sometimes they’re so effective, they just seal the emotional experience of being there—as if you were right there when that photograph was taken—even if you weren’t!

I think it’s so important that you record these “priceless” descriptions as soon as you can. Some of us might think we can remember all of the details. But face it, you probably won’t be able to. They’re fleeting. And even if you could, you and your memory aren’t going to be on this earth forever.

With prints, it was easy to record this information by writing the stories by hand on the back. But, now that we are wishing to move our prints, slides and negatives to a digital form in our computer, how do we easily add this information so that it can live with each master image file?

It was seriously a life changing day when I discovered the magic of a “non-destructive” photo managing program.

With “non-destructive” editing, all of the edits (enhancements) you make to your photographs are managed by the program itself. Your original photo remains untouched. It’s like having a guardian angel that protects your master images at all costs. It’s brilliant and is 100% absolutely indispensable to me now. 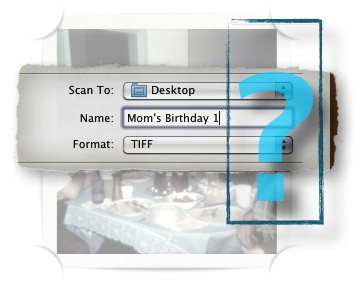 As my own scanned photo collection grows, it has really become obvious to me how thankful I am for the added attention I have been putting into the filenames I give to all of my scanned images.

When you’re scanning, it’s really easy to get into a “robotic” mindset where you are just trying to scan as many photos as possible in a sitting. So when you get to that blank field each time that asks you to type in a name for the file, it’s tempting to just quickly bang out a few descriptive words with little thought to how useful they will be to anyone later.

The DPI You Should Be Scanning Your Paper Photographs

One of the most important decisions you face when scanning anything with your scanner is choosing what dpi (“dots per inch”) to scan with. And specifically for this post, what is the best dpi to use when scanning and archiving your 8×10″ and smaller paper photographic prints – which for most people, make up the majority of our pre-digital collection.

Making this decision was very challenging for me and certainly a huge part of my 8 year delay. The reason for this is that dpi is the critical variable in a fairly simple mathematical equation that will determine several important outcomes for your digital images.

Photo Boxes vs. Photo Albums — Where Do You Store Your Original Photos After Scanning Them?

Most of us with photo scanning projects aren't lucky enough to have all of our original paper prints already...

I have always held onto things that memorialized moments of my life. Ever since I was a little kid, I would make sure to carefully store my grade school class pictures or baseball team pictures. They were important to me then and I knew that I should keep them safe. It took a few years for me to realize what service I had done myself by not letting these precious items get lost or thrown away. They are utterly priceless to me now.