How to Batch Change Titles and Descriptions in Photos for macOS

Have you ever wondered how to batch change the name and even the caption of multiple photos at a time in Photos for macOS, to the same information for all of them?

For example, you would want to do this if you had a group of photos all taken on the same day, during the same event, and you want to label them in a very similar way — if not the exact same way.

This is a very common need, and knowing how to do this in Photos is not as easy as it was in its predecessor, iPhoto. 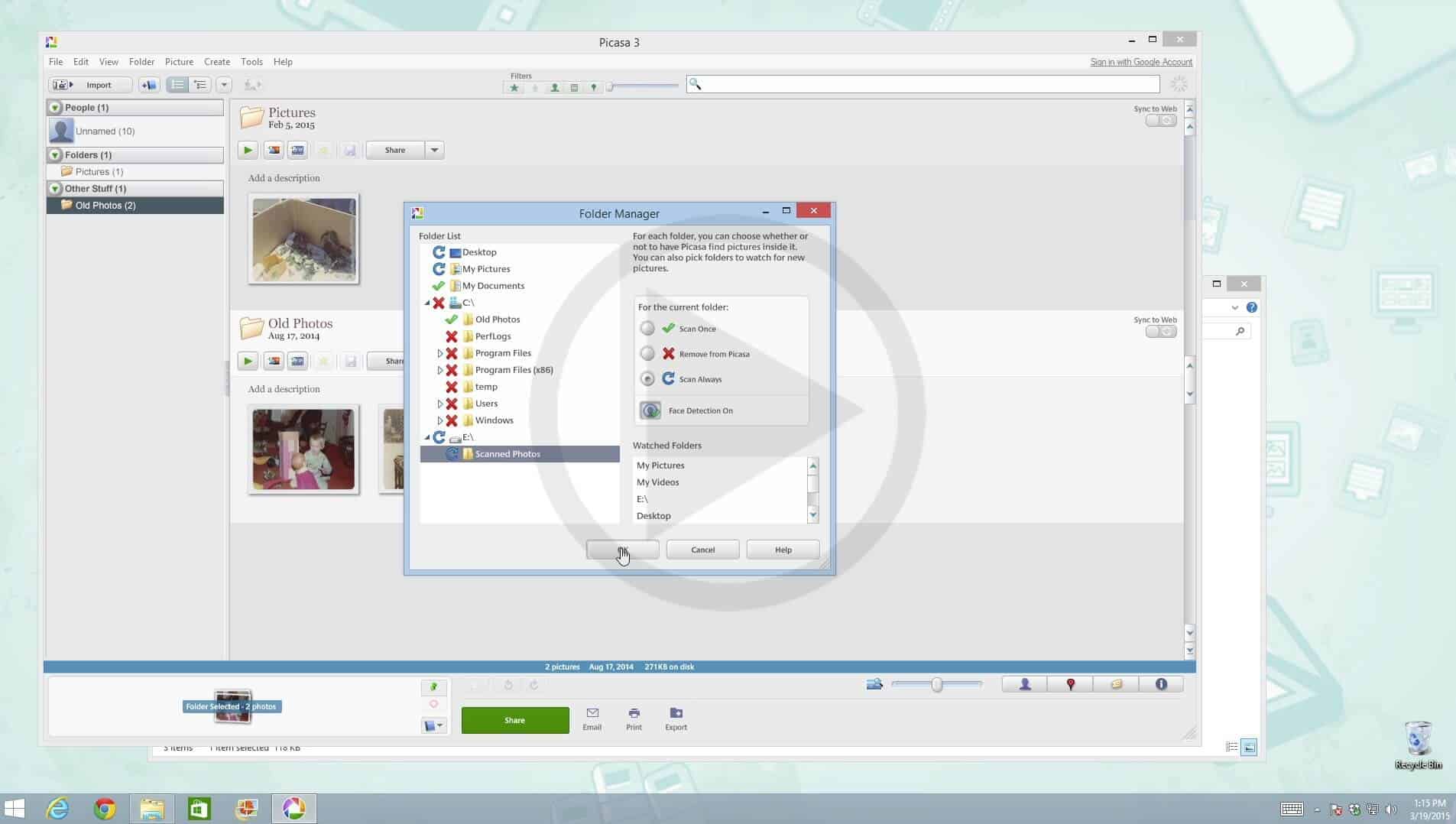 Q&A: How Do I Add Photos Already On My Storage Drives Into Picasa? (Video)

A lot of people have photos stored in folders on their storage drives, so it makes sense that if you’ve never used a photo manager before, they can seem a little daunting as far as understanding how they interact with your photos already being stored on your computer.

In this Q&A style tutorial video, I answer a question I received from a reader of Scan Your Entire life on how Picasa fundamentally works to select which photos on your internal or external storage drives are used inside of the application.

Basically, I feel what’s in this video is the most important thing to understand in order to get the most out of Picasa.

Q&A: How Can I View My Picasa’s Photos Captions Using Any Windows PC?

Entering photo captions inside a photo managing application can be a very liberating experience. These programs make it so easy to keep track of your photos’ captions — basically the information you or one of your family members may have taken the time to write on the back of your prints that explains if nothing else, what and who is in the photo you’re holding.

But, once your photos are being viewed outside of your favorite photo manager, how do you then see and possibly even edit this same caption information?

This is a question I get asked a lot, and in the video below, I answer Sylvia who specifically wants to know how she can view the caption information she entered in using Google’s Picasa photo manager while using a Windows PC.

Photos For Mac: The Good, The Bad, and What iPhoto and Aperture Users Will Miss Most

In June of 2014, we all learned that Apple had been building a whole new photo managing program called Photos for Mac OS X. Later in the same month, Apple dropped a bomb and declared they were also ceasing future development of both of their current applications — iPhoto and Aperture.

Apple did however say they would update iPhoto and Aperture to run indefinitely with Mac OS 10.10 Yosemite. So, as long as you are willing to run 10.10, you could in theory use iPhoto or Aperture for as long as your heart’s content.

For the rest of us, we were left sitting there last year, befuddled, with the assumption that Apple must intend for us to eventually move our previous photo libraries over to their new Photos application when it’s released sometime “next spring.”

One Method to Add Photo Captions Visually Below Your Digital Photos

This is a cool way to add captions to your scanned photos without having to rely on embedded metadata. In other words, this way would allow you to have the written caption as a part of the JPEG or TIFF file itself. The main advantage to this idea is not losing your captions over the years (possibly even centuries) should an application “accidentally” delete or write over the metadata contents.

Programs change, data conversion can get lost — this way your caption is part of the photo itself and thus your written information for your photos shouldn’t be lost (the only way this could happen would be to crop it off from the photo). So years from now, people will know who or what is in your photo, and/or any other tidbit you might want to include.

Q&A: How Should I Modify My Current Scanned Photo File Naming Structure?

Choosing an appropriate file name for the photos in our digital photo collection is something we all have to deal with. And not being able to come up with a consistent system that we are happy with turns out to be one of the biggest reasons we put off starting the entire project.

To help you get past this hurdle, I created a 3-part post series called “What Everybody Ought to Know When Naming Your Scanned Photos” that walks you through the system I came up with and use to name my own photos.

Dan Keiper had already been working his own naming method when he came upon my 3-part series. After a bit of thought, he wrote me to see if he should make changes to what he had already been doing, and to seek answers to further questions that he had. Q&A: Should I Store My Photo Collection in iPhoto or Elsewhere on My Computer? Or Should I Use Lightroom?

Maria Ricossa from Toronto, Ontario, Canada wrote to me with the following question:

“Hi Curtis, I have recently purchased a new camera and vowed to be better organized in the photo storage and processing department. A couple questions:

1) Someone told me I should not store my albums in iPhoto but should create picture files elsewhere on my computer. What would you suggest?

2) I am currently using Photoshop Elements to process my photos. Do you have any thoughts on Lightroom as opposed to PE?

Thanks. I look forward to reading your newsletters.” ~ Maria Ricossa.

Photos are the driving force behind the story told in most albums—no photo, no story. But should it be that way?

I want to help you tell a lifestory in your scrapbooks using the events and relationships of your life, not the photos you happen to have on hand, as your primary organizing element. This ordering principle, more than any other, will help you make meaningful lifestory photo albums using photos, captions, and cameo narratives.

It’s very likely there are a bunch of photos in your iPhoto collections that are displaying the incorrect date and time when the photos were taken.

And this isn’t just a problem when your photos won’t sort chronologically. This will also be an issue for you every time you create a new Event or album inside of iPhoto and it constantly tries to identify them using the wrong date.

Maybe the date and time weren’t set correctly in your digital camera before you took these photos. Or it’s possible you scanned a bunch of prints or film negatives and they are still reflecting the dates and times when you actually scanned them.